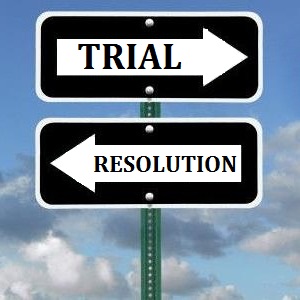 In our last issue we discussed the process of a Bail Hearing.  As a reminder, a Bail Hearing takes place after an arrest and a criminal charge by the police.  The purpose of the Bail Hearing is for a Justice of the Peace (JP) or a Judge to determine whether or not the Crown has shown cause for the detention of the accused.  Whether an accused is detained in custody or released after a Bail Hearing, the criminal procedures are in their beginning stages.

In essence there are 2 paths to deal with a Criminal Charge.  Each of the paths require different procedures.  The accused may wish to resolve the Criminal Charge via plea or request a trial.

If the accused wishes to resolve the Criminal Charge via plea, the lawyer will meet with the Crown attorney to engage in “resolution discussions” in an attempt to reach a favourable resolution.  The lawyer may then set a Judicial Pre-Trial date in court.  In the Judicial Pre-Trial, the lawyer will meet with the Judge in the Judge’s chambers along with the crown attorney and discuss a possible resolution.  Following the Judicial Pre-Trial, a plea and disposition date is set before the same Judge that presided over the Judicial Pre-Trial or a different Judge.  On the date of the plea, the accused will plead guilty to the agreed charges.  If there is an agreed resolution between the lawyer and the Crown Attorney, both the crown and lawyer will advocate for a “joint position”.  If there is not an agreed resolution, the crown will state their position on sentencing and the lawyer will advance his/her position on sentencing.  The criminal code makes it clear that the ultimate decision on sentencing belongs to the Judge even where there is a “joint position”; however, for the most part, Judges honour “joint positions”.

Whether an accused charged with a Criminal Offence wishes to “resolve” their matter or take their charges to trial, it is always recommended to retain a lawyer to best protect their rights and ensure the best results.

Call me at 519-254-BAIL (toll free at 1-844-BAIL-1ST) or fill the form online to book your free and confidential consultation today.

Fill out the form below to receive a free and confidential initial consultation.